On August 23, 2012, Live Free Home Health Care invited Ann Saulnier to come to the New Hampton office for a taped interview with Clinical Director and Co-Owner, Jennifer Harvey RN BSN, to share her experience with the care LFHHC provided for her late father, Edward LaSala.

Ann contacted Live Free back in August of 2010 after one too many disappointing experiences with another local home care agency. Ann says of that time in her life, “I was at the end of my rope. I was exhausted; my energy was fueled solely by adrenaline and my focus was on the well-being of my father. When I called Jennifer to come out to visit my father and me for the initial assessment, I knew what I was looking for in a home care agency. I also knew what I wasn’t looking for. I didn’t want to be told ‘Everything will be taken care of,’ I’d heard that all before. I remember shooting question after question at Jennifer, and she was able to answer each one with understanding and sincerity. I knew I found the right place. I cancelled my appointments with other agencies I contacted; I just knew my dad would be in the best hands of care.”

Ann looked back on those negative experiences with other care providers and couldn’t help but compare those with the positive responses she received from Live Free, saying, “I would call my other agency and ask to speak to the care manager, and I wasn’t allowed to speak with her. I had to jump through hoops to speak with anyone in charge. When I called Live Free and asked to speak with Jennifer, I was put directly through. I was never questioned on the legitimacy of my call. It made my relationship with Live Free feel so much more personal and sincere.”

Ann’s father, Edward LaSala PhD, had been diagnosed with Alzheimer’s disease, a form of dementia that is characterized by the loss of cognitive abilities and increased reliance on others. The disease becomes progressively worse over time and currently 5.4 million American are living with the disease, according to the Alzheimer’s Association. Ann was very close with her father and fondly remembers the times when her father was able to say, “I love you.”

She knew, with the progression of the disease, that one day he would not be able to speak those words. Each time he would remind Ann and say, “I love you,” she would reply, “I know, Dad; I love you, too. I’m going to put that one in storage.” When Ann could see her father wanted to say he loved her in the final stages of his life, she would simply say, “I know, Dad, I’m taking one out of storage.”

Over the year and a half that Live Free provided care for Edward, Ann grew very close to the team of caregivers dedicated to the well-being of her father. Those caregivers integrated themselves into Ann and Edward’s lives in such a rare and special way; even as Edward’s illness advanced, he never had a bed sore (though he spent most of his time in bed) and was always clean-shaven. After Edward was moved to St. Francis Rehabilitation and Nursing Center, Ann was not able to keep in such close contact with her father’s team. It was arranged on the day of the televised interview that Ann would be reunited with her caregivers: Brooke Couture, Penny Leger, and Tina Gosnell. However, she was not told those caregivers would be joining in the interview. Ann found it odd that these girls were not returning her messages that past week, until the end of the taped segment when Jennifer asked Ann what those caregivers meant to her and her father over that year and a half. As Ann began to share how extraordinary those girls were to her, Brooke, Penny, and Tina walked up the stairs of the Live Free office to join Ann. Completely surprised and overwhelmed at the sight of the team that dedicated such a considerable amount of their lives to her father, Ann was able to only say, “Oh. My.” Embraces and tears of happiness among Ann and her girls filled the final portion of the interview. Upon gaining composure, Ann expressed how happy she was to see her caregivers once again, saying, “I never expected to see them today! I’m thrilled they were able to come today and remember my father. We are all going to stay in touch now.”

The care and support provided by Live Free Home Health Care for Ann and her father is an amazing example of how caregivers and their clients’ families inevitably grow together over time. Even after a client has passed, the memories and relationships continue to live on. LFHHC takes the time to get to know each client and their loved ones on a personal basis that is unparalleled by other home care agencies in the state. 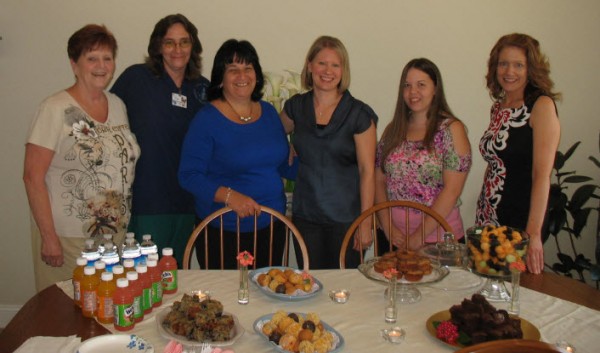 If you or a loved one is seeking home care assistance, Live Free Home Health Care can help. Please visit www.livefreehomehealthcare.com for more information, or call us at 603-217-0149.

Taking Care of Seniors with Cognitive Decline: How Home Care Can Help